Many of us enjoy some time on the Xbox, blasting away at the ‘enemies’ and having fun. Xbox devices run on electricity, which means there is an opportunity to bring the device up to the solar grid to save up on some power bills.

However, can this be done? How much solar power do you need to run an Xbox?

You may need around 180 Watts to power an Xbox for an hour. Add in a 42-inch LED TV that is another 80 Watts. Assuming your solar panel does not run at optimum efficiency, you need at least a 200 to 400-watt solar panel capacity, depending on the weather conditions and TV specs.

This article explores how much solar power you need to run an Xbox. We also look into some related aspects, such as the solar setup and if you need a battery.

What You Can Find On This Page:

How Much Power Does An Xbox Setup Consume?

For an Xbox rig, the most basic setup is to hook the Xbox up to a TV. Controllers generally are powered by dry-cell batteries, so they are not involved here.

We will use this setup to perform the calculations since it’s probably the most common setup. Few of us would have additional speakers or advanced controllers connected to our Xbox setup.

Depending on your Xbox model, you may require 30 – 200 Watts of power to run them for an hour if you are in gaming mode. If you are using it to watch Netflix, you may use significantly less power.

TVs come in all sorts of brands, technology, types, and sizes, which means they also consume electricity at a different rate:

Now that we have the rough numbers prepared, let’s do some basic maths and calculate the power needed to run an Xbox and an LED TV.

If you play games on your Xbox for 3 hours per day, you will need 780 Watt-hours per day. If we stretch that over a month, that will translate into 23.75 KWh per month.

How Much Solar Power Do You Need To Run An Xbox?

We have now decided on the electricity needed to run an Xbox setup. Based on that number, we can calculate the kind of solar power and setup you will need to do so.

When calculating, we assume your solar setup runs at 20% efficiency. Solar power panels generally do not work at 100% efficiency due to things such as the sun’s position.

For example, in the mornings, the sunlight shines at an angle to the panels. This means some sunlight may bounce off the glass and not reach the panels. You may also assume the same during sunset.

Power generation may be best during the afternoon when sunlight shines directly on the panels.

On top of that, sunlight positioning and factors such as weather may affect solar panel efficiency. Power generated may also be lost in irradiation, inverter, or DC cables.

To ensure you have all the power you need to run your Xbox setup, regardless of the time, we need to ensure your solar panels can provide at least 780 Watt-hours per day.

This means you will need a solar panel setup that, when operating at 20% efficiency, can provide 780 Watt-hours per day. When stretched to over a month, you are looking at 23.7 KWh per month.

This should translate into a solar setup that can provide 3900 Watt-hours per day or 118 KWh per month. This is because if this solar panel setup runs at 20% efficiency, it still provides 780 Watt-hours daily.

Assuming you are to install a 300 Watt solar panel, we recommend you run two of these panels with at least two standard 12-volt batteries in parallel to power an Xbox setup. This is to ensure that even with 2 days of no sunshine it can supply all-day tv and playtime.

You may be able to generate enough power for your Xbox setup with just one panel, provided you have a fully charged battery pack. The bigger the storage capacity you have, the more confidence you will have to know that you will have the power to run your Xbox set up anytime.

You can also consider using panels with higher wattage, although they may be bigger.

You may also install high-efficiency panels that operate at 23% or more. This means you do not need to install too many panels to generate the wattage required for your Xbox setup.

Powering your Xbox with solar power is an efficient and sustainable choice for gamers. With the right setup, you can enjoy the benefits of solar energy while still having enough power to keep your gaming experience going.

Taking the time to research and get the facts you need to make your solar setup ready to go will ensure that your gaming experience is even more enjoyable.

The cost of installing solar panels in your home varies depending on the size and type of system you purchase, but it can be very expensive. But why are solar panels so expensive? The following… If you’re thinking about installing solar panels you’ve probably wondered how long it will take to recoup the cost of installation. It turns out that the answer is quite variable depending on where you live… 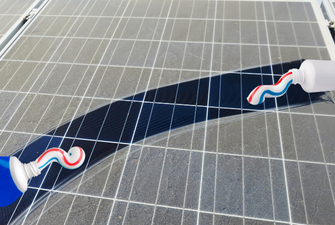 One of the tips to ensure your solar panels work well over time is to regularly clean it. This ensures no dust and debris can cause the panels to get less sun exposure.  Certain water…

Hailstorms are a common occurrence in many parts of the United States. When solar panels are not installed to withstand hail, they can be damaged and stop functioning. Solar panels are subjected to hail tests… How Does Solar Power Feed Back Into The Grid?

The solar power industry is growing and solar panels are becoming more affordable. Many homeowners want to make the switch but don’t know where to... Can You Run a Welder on Solar Power? Try It and Save Money!

A lot of people are looking for ways to save money on their energy bills, and one way to do that is by using solar...